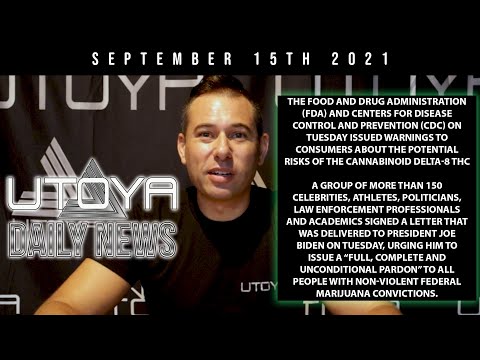 The Food and Drug Administration (FDA) and Centers for Disease Control and Prevention (CDC) on Tuesday issued warnings to consumers about the potential risks of the cannabinoid delta-8 THC, a psychoactive compound that has grown in popularity but exists in an especially grey regulatory space.

While lawmakers have specified that hemp is only federally legal if it contains no more than 0.3 percent delta-9 THC, the most commonly known and naturally occurring cannabinoid, there’s generally a lack of rules governing delta-8 THC, which can be synthesized using CBD from legal hemp.

A group of more than 150 celebrities, athletes, politicians, law enforcement professionals and academics signed a letter that was delivered to President Joe Biden on Tuesday, urging him to issue a “full, complete and unconditional pardon” to all people with non-violent federal marijuana convictions.

This comes as the administration is actively encouraging about 1,000 people who were temporarily placed on home confinement for federal drug offenses to fill out clemency application forms.

The World Anti-Doping Agency (WADA) will conduct a scientific review of marijuana next year to determine whether it should continue an international ban on cannabis use by athletes.

WADA’s marijuana policy became a major focus this summer following the suspension of U.S. runner Sha’Carri Richardson from participating in the Olympics over a positive THC test. The organization’s executive committee on Tuesday said it had accepted a recommendation from a drug list advisory board to reexamine the science on marijuana, which could inform a potential policy change.

But as larger licensed recreational and medical cannabis grow facilities and provisioning centers crop up across Michigan, caregivers like Bringold who helped legalize marijuana feel they are being pushed out. A small group of corporate activists want to tighten state restrictions for medical caregivers and patients. The goal: Cut plant counts, require product testing and reduce homegrown cultivation.

Cannabis contains a multitude of different compounds. One of them, cannabidiol – a non-psychoactive substance – might counteract negative effects of Δ-9-Tetrahydrocannabinol on hippocampus-dependent memory impairment. The aim of the present study was to investigate the effect of vaping cannabidiol on verbal episodic memory in healthy young subjects. We used a double-blind, placebo-controlled, randomized crossover trial in 39 healthy young subjects. Participants received once a single dose of cannabidiol e-liquid (0.25 ml, 5% cannabidiol, 12.5 mg cannabidiol) and once placebo for vaping after learning 15 unrelated nouns.