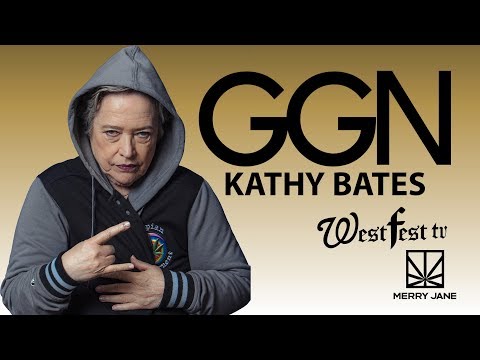 On the latest episode of GGN, the Doggfather sits down with Academy Award-winning actress Kathy Bates to break down decades of cinematic excellence.

Few actresses hold as much Hollywood starpower as Kathy Bates. From her beginning on Broadway, her Oscar-winning performance in Misery, 14 Emmy nominations, and consistently hilarious comedic roles in classics like The Waterboy and About Schmidt, Bates can do it all. In her latest endeavor, Bates goes green, assuming the role of Ruth Whitefeather Feldman, an activist-turned-dispensary owner navigating the unpredictable world of California’s medical cannabis industry in the Netflix original half-hour sitcom Disjointed.

On the latest, very special episode of GGN, Bates joins Uncle Snoop in the studio to break down her long career, her “square” history with weed, mutual connections in the cannabis industry, and the beauty of watching James Brown perform live.

So grab your popcorn, fire up your favorite strain, and grab a seat alongside the Doggfather for stoney conversation with one of the silver screen’s living legends. And for more cannabis-minded Kathy Bates content, keep your eyes peeled for the second half of Disjointed season one, dropping on Netflix January 12th.